The Importance of Saying ‘No’ 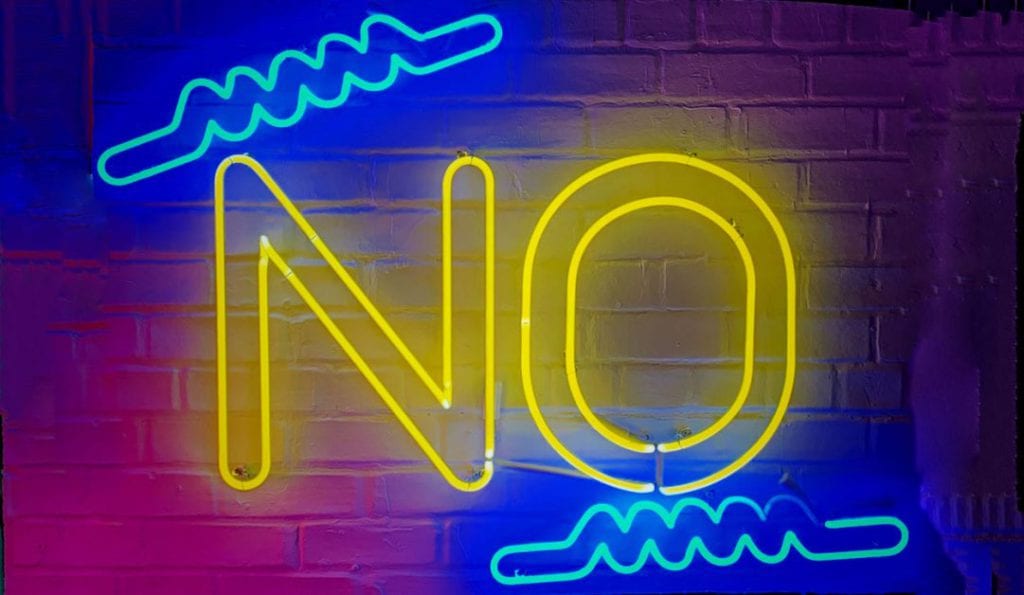 The Importance of Saying ‘No’

‘No’ is a very small word, with a truly huge meaning (it was my first word, just thought to mention), that encompasses denial, refusal, dissent. A noun, adverb and adjective, the word is one of the most used and adaptable in the English language, able to be used both positively and negatively.

As we go through the world taught to be polite and accommodating, as we are encouraged to push ourselves and to be selfless, we forget the word. We forget we can use it. We feel rude when we do. Because we get to hearing it negatively: no, you can’t have that toy; no, you didn’t get the job; no, I don’t like you. To many of us, no is a restrictive word, a word that builds resentment, a word that is ignored or not understood.

We are encouraged to say yes to so much. Say yes to everything. And in some ways, the advice isn’t bad. Take opportunities and risks, go for things you might not have gone for before, give something or someone, a chance.

But they are important boundaries. Physical, emotional and mental boundaries that let other people know how far they can push us. That keep you comfortable, safe and in control.

The word has developed selfish connotations in an age where we are forced to remind ourselves to practice self-love, to be selfish every now and then. The word ‘no’ is how we achieve this. Places we don’t want to go to, people we don’t want to meet up with, events we can’t be bothered with.

We feel the need to juggle multiple commitments and plans, we spread ourselves thin with saying yes, with our eagerness to not disappoint people. Why spend our time in ways we don’t want to? Why clog ourselves up with people who drain us and plans that we spend weeks dreading in the company of someone we are uncomfortable around? How is doing that to ourselves considered a good act of humanity?

No is a negative word, generally speaking. A negative response to a statement or question and we hear this when its spoken. We feel the rejection or the hurt, but, in my own small opinion, no is a neutral word.

“When you say yes to others, make sure you are not saying no to yourself.” – Paulo Coelho

It’s a yes to a night in with a face mask and ice cream. It’s a yes to your mental health, to your physical limits.

I say no when I’m invited to the pub by my family. Not because I don’t want to be with them, not because I don’t want to spend time with them, but because busy pubs at the weekends have the unpleasant affect of triggering my anxiety. No isn’t a refusal for my family. It’s a yes for me, to not strain my mental health, to spend some alone and watch some stupid movie I know they wouldn’t like anyway.

Saying no seems daunting, we feel the guilt or the selfishness as we say it, but we have a duty first and foremost to ourselves. To our health and wellbeing and if that means saying no to someone then so be it. Pushing ourselves into a vaguely recognisable version of who we are so that other people will like us and not think badly of us will only leave us feeling miserable.

The people in your lives who cannot accept the word no are the selfish ones here. The ones who expect to you to think of them before you when they do not extend the same thought. It’s better so say no than to say yes without meaning it.

Saying no is an important step to taking control of your life. It might take practice, it might feel bad at first, but it won’t always. Being able to say no when you need to, having it there, like a safety net, is valuable.

Saying the word is useful.

“NO” is a complete sentence. It does not require an explanation to follow.” – Sharon E. Rainey

Be selfish, darlings, and say no when you want to.