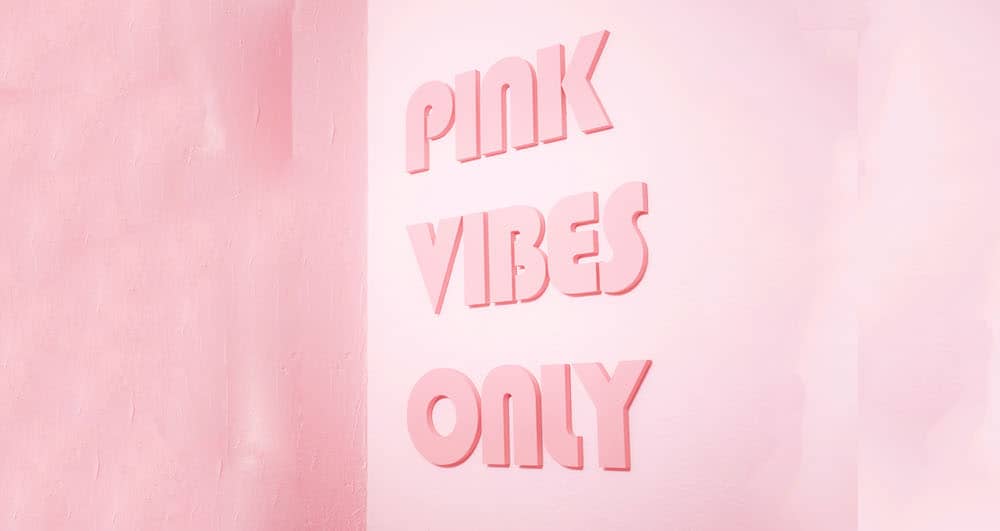 How can we tell this though, only milliseconds after walking through the doors?

More often than not, this split-second decision our brains make about what is ‘boy’ and what is ‘girl’ comes down to one very simple but keenly visual factor: colour. The stark colour contrast between one side of the shop and the other is drawn like an invisible battle line down the centre aisles of clothing departments and toy sections across the world.

On the one side sits the Barbie–pink colour palette of the ‘girl’ section and on the other, with its khaki mix of blues and greens, the ‘boy’ section.

So ingrained into our culture is the division of gender based on colour that often we do not even notice it nor even notice ourselves reinforcing it. In essence, internalised misogyny is a completely naturalised part of contemporary Western culture.

The question remains though, what is it with these colours? Why pink and blue? Why not tangerine and lime or beige and brown? According to historians there are a couple of different reasons that may explain the pink-blue dichotomy we have today.

Some suggest French fashion as a leading influence on the matter, whilst others have cited the pink triangle wore by homosexuals in concentration camps as a cause for the specific feminisation of pink. However, neither of these claims have a great amount of credible evidence behind them.

Many others, more credibly, point out that up until the middle of the twentieth century there was no explicit gender symbolism for children and babies, with pink being just a likely to be worn by a boy as a girl. Victorian photographs and magazines articles from the turn of the twentieth century both support these claims with hard physical evidence.

However, from the 1950s onwards there were societal shifts and the narrative of ‘pink for girls, blue for boys’ began to dominate cultural conventions. It was at this time that mass marketing began to appear, and the post-war years were marked by a drastic increase in globalisation and multi-national consumer groups.

Thus, colour-gender pairings may have arisen as a capitalist marketing ploy, whereby convincing us to buy particularly types of products for particular genders businesses would naturally sell more products to us.

No matter its exact origin, the colour division of the sexes certainly has its roots planted in marketing. In fact, it really is a common-place and age-old tactic of businesses to market specifically types of products to different types of people, as it is believed that it will help sell more products. This style of marketing is called ‘marketing segmentation’, a practice that encourages business to divide and sub-divide their business market into as many consumer groups as possible.

These divisions are based on shared characteristics such as gender, race, location, lifestyle, marital status and a variety of other demographical profiles.

Gender-specific marketing thus seeks to sell the same product to two different genders by marketing it differently, such as the BiC For Her Ball Pen (because women need their own special type of pen, apparently). Effectively, this tactic makes more sales and, thus, more profit for the business.

However, the colour divide does not stop in the shop itself. It follows us out of the door, pervading every single aspect of our lives and structuring our way of understanding the world around us.

For example, how often have you seen a new born baby and been able to guess its sex based solely on the colour of the baby grow that it is wearing? In this way, the gendering of colour functions in a never ending of cycle of ‘X gender wears Y colour, so everyone who wears Y colour must be X gender’. Herein itself lies the problematic nature of colour stereotypes for they present a simplistic way of dividing and understanding the world, and all the people in it.

Thus, when ‘X gender wants to wear Z colour instead of Y colour’ it is seen as abnormal and wrong. Here, colour stereotypes inherently interplay with, and stereotype, an innumerable amount of other conceptions around gender. In this way, the act of dividing products based on sex is not just about colour. Colour in fact plays just one small part in a huge socio-culture system of gender normative stereotyping.

In just one example, girls toys are certainly all coloured in shades of pink but they differ greatly in style and substance to the products marketed to boys, and vice-versa. Whilst boys toys are about adventure, mess and construction, girls toys are more about encouraging nurturing and homemaking behaviours.

The colour of these products becomes tied up with their messages, motifs and stereotypes, inevitably the colour itself comes to take on these symbols and cultural meanings itself – separate from the product.

We must all be honest that at one point or another all of us girls and women have declared our indifference to pink and separated ourselves from it. Perhaps, most prominently, because of its explicit association with being a ‘girls colour’.

We want to be taken seriously Elle Woods-style and be seen beyond our gender, and liking pink just wouldn’t allow that. I mean, just think of the reactions of the other students when Elle turned up to Harvard Law in her all-pink outfit assemble. It says it all, really.

Not liking pink or blue has inherent connotations that go far beyond the matter of personal preference. Unlike other colours, pink and blue have far reaching cultural significance, encompassing a nuanced societal implication for our understanding of our own gender and how we view the gender of others.

There are far too many cute pink things out there for women to be held back by culturally self-imposed hatred and sexism. As Elle Woods said, ‘Whoever said orange is the new pink is seriously disturbed!’. Preach it, sis. Let’s crack down on internalised misogyny.