The underrated City break of Genoa and Region of Liguria 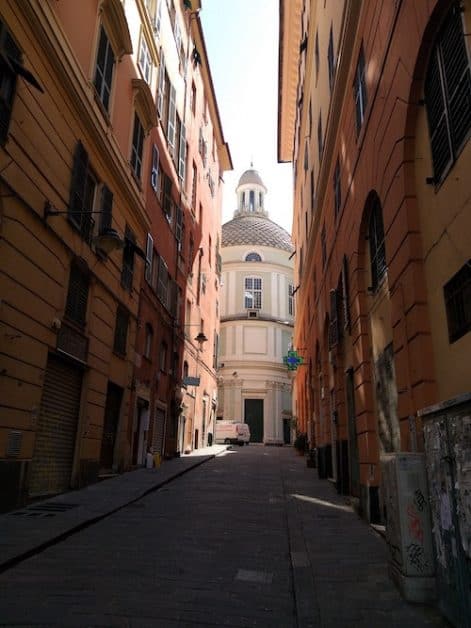 The underrated City break of Genoa and Region of Liguria

Mini breaks are a well-deserved way to recharge or surprise your besties with as a present they need in their life. Italy has many regions that are great places to explore. Outside of the popular ones is the unspoken gem of Genoa, Liguria. It is considered incomparable to the undocile charm of old Rome, romantic like Venice with its canals or rich artisan culture like Florence.

So why go to Genoa and surrounding Liguria coast?

Well, for one Christopher Colombus was born there and you can even visit the site of his home. Two it is just as charming and has its own rustic, romantic and artisan vibes that can compare. You can count on it not being as busy as the others, especially between January to May. Romeo + Juliet, 1996 by Baz Luhrmann could have easily had swapped the actual film set in Mexico City for the centenarian chic of Genoa and its fetching little towns and villages. They will give that same vibe of hyper-colourful feels. Yes, it is that intoxicating of a city to visit.

The home of focaccia and Pesto in the city of Genoa

Santa Margherita and Portofino need to step aside, it is time for the sleepy side of the Italian Rivera to gloss in the limelight. Genoa and its beguiling towns of Liguria can be just as romantic, glamorous and luxurious as you want it to be even if it is at a slower pace than Portofino.

There are lots to explore as each region is different. Italian food needs no introduction, we all know the hype is real. Liguria is the home that birth pesto and the northern region’s pasta called Trofie. If that was not enough it is home of a flatbread oven-baked called Focaccia and Focaccia al Formaggio. To you and me that means flatbread with cheese. The restaurant Locanda Tortuga in Genoa is the best place to try Focaccia al Formaggio for the first time. Even drizzled with Truffle oil it is just heavenly. To get that home-cooked Italian vibe visit one of Genoa’s local supermarkets to pick up some fresh Trofie pasta and fresh pesto.

Genoa is one of those city’s you can walk around exploring for hours as you take in some shopping. Peeking into elegant Cathedrals and sampling all the foods they have to offer. Genoa is a hilly coastal city laid out in a way you could not get lost in as it seems all roads lead back to each other. Staying in an Airbnb that is central and renting a car is just as affordable as staying in a quaint hotel and using public transport. The best mixture is a central Airbnb town apartment with tall ceilings and wooden floors, with off-site parking. Renting a car is useful for exploring the towns stretched across the coast to explore on your own time but not essential.

Train hoping the towns of the Italian Riveria

Liguria doesn’t just have Genoa under its belt. There is a whole coast of towns to visit, each with its own character. Reachable by train for just the ticket price of €1.60. The train stations are set to the heart of the villages which means no out of reach walk. You can go town hopping spread over two days, depending on which town takes your fancy to give your time.

If you someone who prefers the wandering around experience with lots of light shopping wrapped with gorgeous hilled scenery who prefers to get their history from the visuals and locals.

Nervi, Bogliasco, Pieve Ligure and Sori can be covered in one day into the early hours of the evening. Each will have its own set of pastel-coloured houses lining its own nature carved hills and marinas.

Nervi will be the stop for shopping with modest expensive designer taste along streets planted with fresh orange trees. A lengthy Porticciolo marina offers a walk to discover chic souvenir shops and restaurants to stop for a snack, meals of fresh local seafood or just a drink. The best thing about each little village is access to the water should you fancy a swim. Sori would be best for this as it is a sandy beach village. It is also the home of the Church of Santa Margherita, that sits right on the beach and could have indeed been the backdrop for Romeo and Juliet’s wedding.

Recco, Camogli, Santa Margherita and Portofino can be spread into another day. If you are into water sports then give most of your time to the waters at the resort village of Recco. Otherwise, it is Camogli that will steal most of the day because there is much to take in from its marina. Including the lookout point from the ruins of Dragnora Castle with 360 views and the church of Santa Maria Assunta for that high glamour 12th-century decor.

Santa Margherita is where to shop for fine handmade Ligurian goods and where to catch the ferry or a bus ride up the hills to Portofino. Before you go spend some time along with the coast with a mini casual hike up into the hills to nosey down the streets of some exquisite villas. There will be lots to eat along the way just follow your nose’s mind and you cannot go wrong. If there is time, explore between Camogli and Portofino where you can spend mid-morning diving to the Christ the Abyss which is a huge underwater statue that depicts Jesus Christ.

After all of this, you will be fulfilled with adventure and essence of the Ligurian way of life that is enthralled with breathtaking sea views accompanied by great food. You will not have time to think of nothing other than which side of the coast to stroll through next.