As March 8th came around more, International Women’s Day endeavors to celebrate, uplift, and empower women and girls all over the world. From social awareness campaigns, political protests, art exhibitions, film festivals, and feel-good-totally-shareable-Insta-stories, International Women’s Day is all about, well, women.  But it’s also a stark reminder of the challenges women face.

All of that good stuff aside, we still — unfortunately — live in a patriarchal society where women face a number of challenges simply because of their gender. Moving through the world as a woman is a complicated, problematic, and often dangerous space to occupy.

The contradictory nature of life as a woman has recently been highlighted in a viral video posted by girls.girls.girls magazine and narrated by Cynthia Nixon. The video, entitled “Be A Lady They Said“, showcases the endless multitude of contradictions women face in society, from sex appeal, to fat shaming, to shaving and domesticity.

While the video made waves around the world, its content and message are nothing new, as these are the contradictions women face every day of their lives. Instead, perhaps the best takeaway from this video is that women are united in our struggles, reminding us that societal change is still needed to dismantle patriarchal, sexist ideals.

It is important to note that the contradictions that women face do not just make life confusing to navigate. They can also make life dangerous as these contradictions in themselves contribute to male entitlement, internalized misogyny, harassment, and rape culture. So here are some of the main challenges that women still face in society in 2020.

The Gender Pay Gap, or Wage Gap as it is also known, is the average difference in earnings between men and women who are working. There are many misconceptions about the Gender Pay Gap, specifically, whether it even exists or if we still need to think about it in 2020.

A lot of people in the UK, believe pay discrimination ended in 1970 with the introduction of the Equal Pay Act. This Act introduced the notion of  equal pay for equal work whereby workers, regardless of gender, would be paid the same amount for the same job role and labor. Thus, the Gender Pay Gap is not about people being paid differently for the same job, as that is illegal and very, very rarely happens in 2020.

It is important to note, the Gender Pay Gap is not the same thing as an Equal Pay Gap.

The Gender Pay Gap is thus concerned with how earnings are different between men and women. This comes down to a variety of social factors and influences, including maternity leave, motherhood, gender norms, and personal choices. While many of these factors are the same worldwide, the Gender Pay Gap varies from country to country — some places in the world have a huge gap in earnings, but others have nearly closed the gap altogether.

If we look at motherhood as just one key example, then this factor contributes to different wages between men and women in a number of ways. Many studies have highlighted how the increasing share of the Gender Pay Gap over time is due to childbirth and childrearing, this has been coined the “motherhood penalty.”

Due to social norms and expectations, women are the ones expected to take more leave following the birth of a child in comparison to their male partners. Women are then also socially expected to spend more time at home to look after children, by taking up only part-time or casual work. This affects the woman’s ability to earn a larger wage as the gaps in her work experiences make her unequal in comparison to her male colleagues when applying for new jobs and promotions.

How do we close the Gender Pay Gap?

In order to close the Gender Pay Gap there is no simple solution. It is not simply a case of paying one group more or less, which is illegal and wrong in the first place. It is actually about changing the very socio-cultural systems that exist in society around gender norms and expectations. By allowing, and encouraging, men to take an equal amount of paternity leave following the birth of a child, we can help rebalance the amount of childcare undertaken by each parent.

Over the last couple of years, conversations around sexual harassment, assault, and rape culture have come to the forefront of public consciousness. These allegations were a watershed moment that was prompted by the sexual abuse allegations against movie producer Harvey Weinstein, brought by over 80 different women. The allegations against Weinstein led to the #MeToo social media movement’s domino effect. Victims of sexual assault now felt confident enough to come forward and report their abuse.

Even though Weinstein was found guilty of a number of charges in February 2020, women around the world still face the threat of sexual assault and harassment in their daily lives. According to RapeCrisis.org, 20% of women have experienced some type of sexual assault since the age of 16, equivalent to 3.4 million victims. As well as this, 3.1% of women, a whopping 510,000 aged 16 to 59 had experienced a sexual assault in the last year.  These shocking statistics highlight just how prevalent sexual violence really is.

How do we deal with this?

Combatting sexual harassment and assault is easier said than done but it is something we must all strive towards in order to end, or at least reduce, violence against women and girls. This can mainly be done through education by making leaders in workplaces and organizations aware of how harassment takes place and is unconsciously encouraged. Anti-harassment workshops and the implementation of strong policies on the matter would help to stamp out behaviors that would otherwise go unnoticed and underreported.

As women, we must all band together to continue to support other women who are victims of sexual abuse. Not slut–shame them, or question what they could do “differently.” We must work together to support these women and bring them justice through the courts. Because even now sex crimes continue to have an extremely low conviction rate.

Female Genital Mutilation, or FGM as it is also known, is a religio-cultural practice where the female genitals are cut, injured, or changed. During this practice, the female genitals are either partially or entirely removed. FGM is also known as female circumcision or cutting, and also goes by a variety of other terms such as sunna, tahur and khitan.

FGM is most commonly carried out on girls prior to the beginning of puberty, up to the age of 15, and, increasingly, on infants who are only a few days old. There are no medical or hygienic benefits to FGM. Its continued practice is purely for social and cultural acceptance, religion, preserving virginity, making women ‘marriageable’, and enhancing male sexual pleasure. Practicing communities believe that women who do not undergo FGM are unclean, unhealthy, and unworthy.

The practice of FGM has both short and long-term negative effects. The short-term effects can include complications such as severe pain, infections, bleeding, difficulty in passing urine, and shock, whilst the long-term impacts include poor physical, sexual, reproductive, and mental health. There are four main types of FGM:

Where is FGM still being practiced?

In the UK, FGM is illegal and is a form of child abuse. However, this is not so true in other places throughout the world where it is still a commonplace practice. The United Nations states that while FGM is “primarily concentrated in 30 countries in Africa and the Middle East,” FGM is actually “A universal problem … also practiced in some countries in Asia and Latin America.” The UN also notes that “Female genital mutilation continues to persist amongst immigrant populations living in Western Europe, North America, Australia, and New Zealand.” 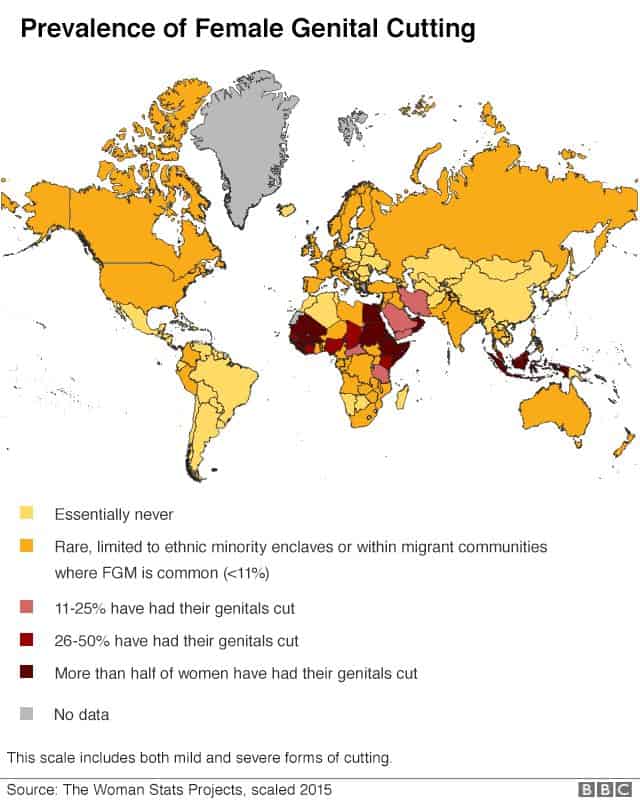 It is estimated that around 200 million girls and women alive today have undergone some form of FGM, with millions more still at risk around the world. However, this number is just an estimate and the realities of FGM could be far worse than we realize.

FGM is a horrifically violent act that is extremely traumatic for the girls who undergo the practice, often against their own consent. It’s defined by the UN as an act of Gender-Based Violence, or GBV. The UN defines violence against women as “Any act of gender-based violence that results in, or is likely to result in physical, sexual or psychological harm or suffering for women including threats of such acts, coercion or arbitrary deprivations of liberty, whether occurring in public or private life.”


How can we stop it?

FGM  is a cruel, violent, and traumatic practice that is a gender-based way of controlling and oppressing women and girls. The UN endeavors to end FGM by 2030, and in 2012 the UN General Assembly created the International Day of Zero Tolerance for Female Genital Mutilation with the aim of amplifying and directing the efforts to eliminate this practice.

What other challenges do you think women still face in the 21st century? Let us know below!

Disclaimer: This website does not provide medical advice. The information, including but not limited to, text, graphics, images and other material contained on this website are for informational purposes only. No material on this site is intended to be a substitute for professional medical advice, diagnosis, or treatment. Always seek the advice of your physician or other qualified health care provider with any questions you may have regarding a medical condition or treatment and before undertaking a new health care regimen, and never disregard professional medical advice or delay in seeking it because of something you have read on this website. 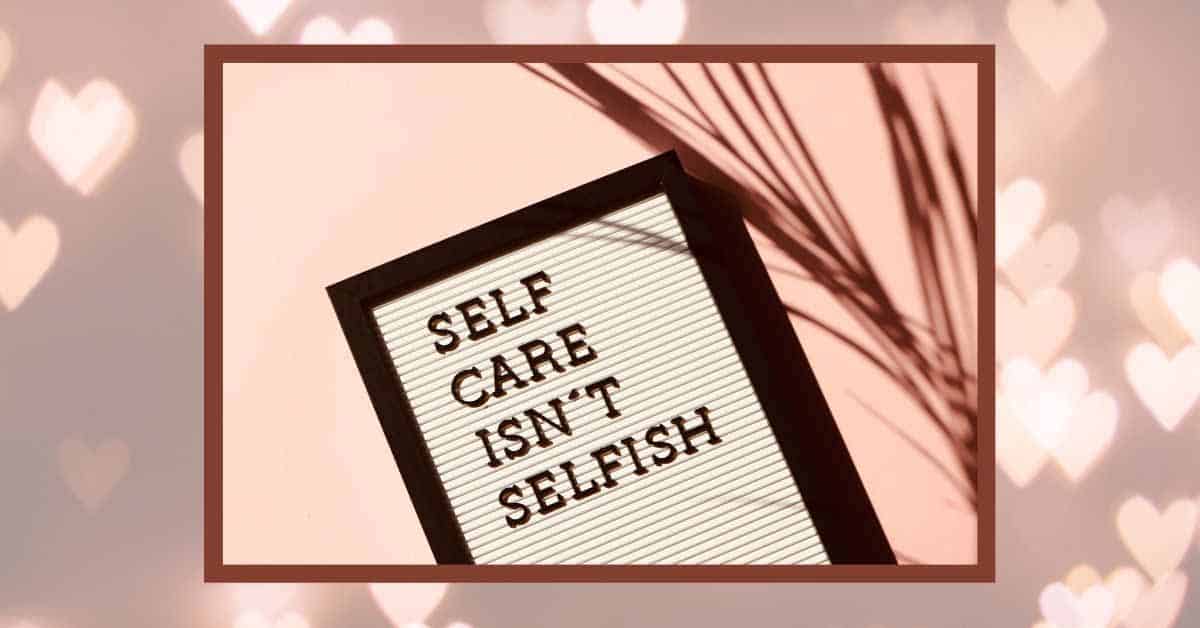 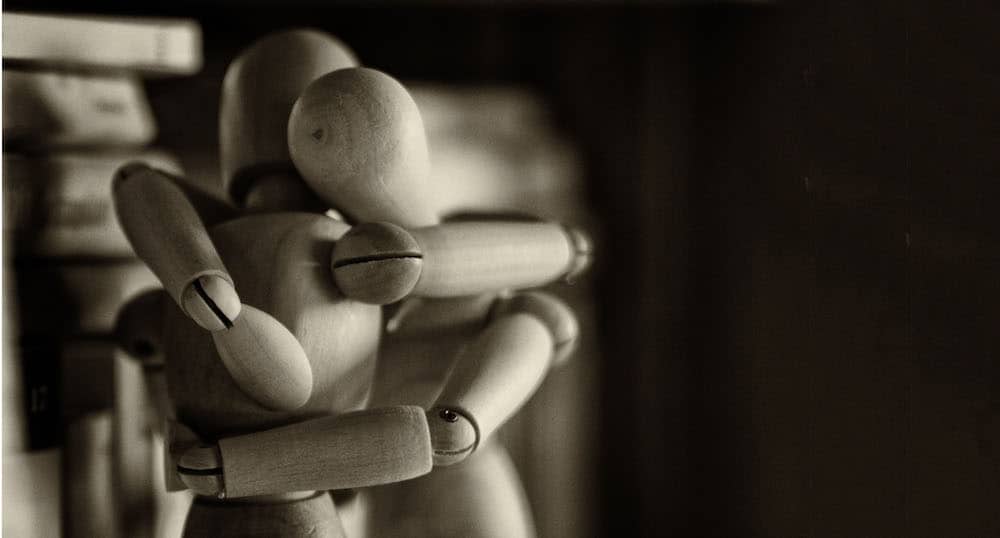 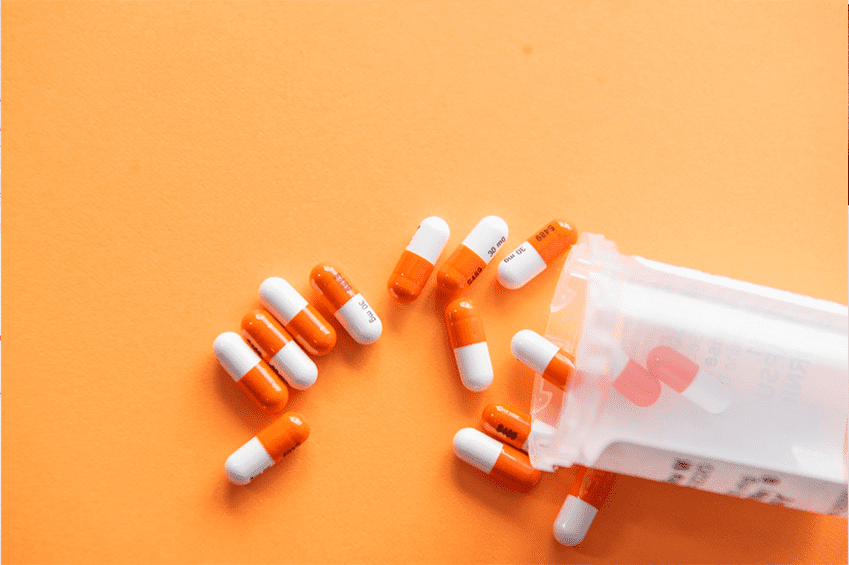 Polypharmacy and the risks of a hormonal imbalance