Grab yourself a piece of Escapism… 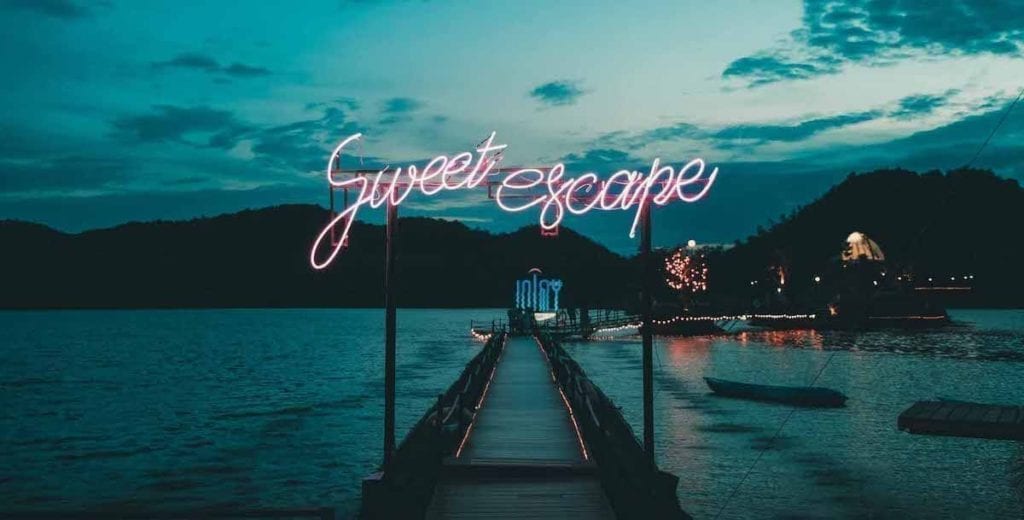 There may be light at the end of the tunnel, but that doesn’t stop the news and daily briefings being any less depressing. Some people respond by immersing themselves in apocalyptic films like Outbreak, but we say what you need is pure escapism.

Here’s our Selfish Darling pick of the best podcasts, books and screen time, that has absolutely no politics, health statistics or scare stories; just the ability to transport you to a different place and time when washing your hands after the postman has been wasn’t even a thing.

Podcasts were already having their ‘moment’ with 7.6 million UK adults tuning in to their favourite podcasts each week; but being stuck at home means many of us have discovered the delights of a gritty drama or weekly update through our headphones. I enjoy a true-crime podcast like The Immaculate Deception, but on the theme of escapism and keeping it light, these podcasts will transport you away from the doom and gloom.

Hosted by singer Jessie Ware and her mum Lennie who happens to be a bit of a chef. Each week famous guests pop in for a natter about food, what their last supper would be, their best meal ever and their worst table manners, all while eating something delicious. Jessie and Lennie are charming, funny and you’re left wondering when you’ll get an invite.
Highlight guest: Tom Kerridge for his honesty and inspirational story

Hosted by Elizabeth Day, this podcast is a series of interviews with celebrities who share the failures they’ve had in life, (Relationships/career/friendships) and what they’ve learnt from them. Candid and hilarious, the very first interview kicks off with Fleabag’s Phoebe Waller-Bridge who is the queen of making mistakes and quite possibly not learning from them. (Read Why making a mistake might be the best thing you ever did for more on this) There are seven series in total, so they’ll keep you going for the rest of the summer.

You can tell the idea for this podcast was dreamt up on a boozy night out. Hosts Hannah George, Catie Wilkins, Taylor Glenn and a new guest each week (from comedians to crime writers) basically get drunk whilst discussing real-life crime cases and try to pick apart what happened. The escapism factor comes in, not because of the content (the crimes are real and often gruesome) but because they are hilarious and it feels like listening to your three oldest friends, getting drunk.

We would be happy listening to Dolly’s Tennessee tones all day, but this 9-part non-fiction podcast explores what makes Dolly the way she is. We get the lowdown on growing up in Tennessee, the civil war, her life and influence on the music industry, the accent and the boobs, as radio host Jad Abumrad interviews Dolly and many of her friends. Most episodes are 30-40 minutes long and of course there are snippets of songs we all love as Dolly explains what they all mean – ready… Jolene, Jolene, Jolene, Jooooollllleeeeeeennnne.

The perfect podcast for anyone who ever poured their hearts out in a diary and hid it under the mattress with the words: Don’t read this mum scrawled over the front. Its twenty-minute-long episodes feature adults reading from embarrassing letters, diaries, poems and songs they penned as teenagers. It’s cringeworthy and sweet in equal measures and will take you back to the nostalgia and embarrassment of your love-sick youth.

Journalist Holly Rubenstein interviews celebrities about the places that have shaped their lives, from earliest travel memories to the place at the top of their bucket list. Guests include Jo Malone and Sir Ranulph Fiennes. We may not be able to holiday abroad yet, but at least listening to this, we can plan our next adventure (even if it’s in our heads).
Handy tip: each podcast is categorised as either long haul or short haul depending on length so you can choose based on how much time you have. There’s also a list of countries each guest talks about so you can quickly scan anywhere you want to hear more about.

Where should we begin

Eavesdropping on other people’s problems is one way to help you forget your own. Renowned Therapist, Esther Perel allows you to listen in on real people’s relationship therapy sessions. It’s all unscripted and anonymous and the clients change each week, but the problems and people are real, so it’s just like having a therapy session yourself.  Perel’s insights and understanding are as compelling as the stories you’re listening to.

Suggested to me by my daughter’s Spanish teacher, for anyone who wants to improve their Spanish – Duo Lingo is a collection of true stories in easy-to-understand Spanish (with English narration). They’re all around 20-minutes long so quick and easy to get into – a paragraph is read in Spanish, followed by the English translation, so whilst they are aimed at intermediate-level Spanish, they can be enjoyed by beginners who want to listen to as much Spanish as they can. There’s also a French version for those who want to come out of lockdown bon en langues.

Six books to get you through…

Escaping into a novel has never been more necessary – here’s six books to help you down the rabbit hole.

The Immortalists, by Chloe Benjamin

It’s 1969 and the four Gold children visit a travelling psychic in Manhattan’s Lower East Side, who tells them individually the date they will die. It then follows their lives as each child has to choose whether to live by the prophecies they were given or whether to ignore them.

This New York Times bestseller is not only a family-sibling saga, but also examines how much we are in control of our own fate.

In the House of Helios, God of the Sun and mightiest of Titans, a daughter is born, but she is a strange child and doesn’t possess the power of the Gods, so is quickly banished to the world of mortals. There she discovers she does have a power – the power of witchcraft.

Don’t be put off by the Greek mythology – Madeleine Miller beautifully weaves ancient myth and adventure with betrayal, bloodshed, feminism and magic and is by far one of the best (and award-winning) books I’ve read.

Fans of Private Detective Jackson Brodie will welcome his return (after nine years) in Kate Atkinson’s latest novel. Jackson is now living in a sleepy seaside village with his teenage son (and Dido the dog) where he unwittingly stumbles into old secrets which were supposed to remain buried.

A whole host of new characters appear (we adore Crystal) as well as old ones from previous books, you’ll love the dry humour, clever storytelling and the secrets of a seaside town.

Where the Crawdads Sing, by Delia Owens

This New York Times bestseller centres around a Barkley Cove, a small coastal town on the North Carolina coast. When handsome Chase Andrews is found dead, everyone suspects the so-called Marsh Girl – Kya Clark, who has survived alone amongst the gulls and the wildness of the marshes for years.

But Kya is not what they think, and her intriguing wild beauty starts to captivate two men from the town. A coming-of-age story, interwoven with murder, small town mentality and raw natural environment.

A Theatre for Dreamers, by Polly Sansom

1960 – with revolution about to embark on the world, the Greek Island of Hydra has a collection of poets, writers and musicians all tangled together in a heady mix of bohemia and Leonard Cohen.

In the middle of this arrives teenage Erica, who observes (through her own grief), the lives, loves and lusts of this free-spirited group, against the intoxicating backdrop of blue-skies and Bougainvillea’s.

The Temptation of Gracie, by Santa Montefiore

A holiday read, for holidays we can only dream of. Widowed Gracie Burton finds an ad in a magazine for a week-long cookery course in the Tuscan countryside, which she quickly books with her lifesavings. She’s joined by her daughter and granddaughter who she has a strained and distant relationship with.

What no one knows is the real reason Gracie was drawn to visit Italy and the extraordinary and secret life that she had before.

Clothes… and other things that matter, by Alexandra Shulman

Alexandra Shulman edited British Vogue from 1992-2016, so she is perfectly placed to write this part-memoir, part fashion bible, focusing with honesty and integrity on her life, career and the clothes that shaped her. The book leads us through her life in a rough chronological order, starting with her childhood, with each chapter taking on the title of an item of clothes – ‘The Geography Teacher’s dress’, or ‘Red Shoes’, for example. We then get her musings on life, being at the helm of vogue for 25 years and how particular pieces in our wardrobes can invoke the emotions of the past or represent future parts of our lives.

The short chapters and illustrations make it very easy to dip in and out of and it’s just as enjoyable as imagining a time when we can wear all the clothes in our wardrobes again.

You’ve probably all seen Osark (brilliant) and The Last Dance (Not just for basketball fans, also brilliant), but if you want pure escapism from your TV, try these out for size.

The Emmy-winning comedy drama Glow, (or Gorgeous Ladies of Wrestling), was released in 2017 with an almost all-female cast, excellent leotards and big 80’s hair and make-up. It follows the lives of a group of women performing for a wrestling organisation in Los Angeles and is based on the all-female wrestling shows from the 80’s. Its popularity has led to its fourth (and final) season being announced last year.

Find it on Netflix.

Delve into the world of ice skating, where a figure skater tries to get back into the competition after a head injury. Expect lots of dark tension and overbearing mothers, beautiful skating and January Jones (of Mad Men fame) playing a bipolar mother.

Starring Paul Rudd (Phoebe’s husband in Friends), who has a spa treatment to help him become a better person – except two of him emerge from the spa – one tired and cranky, one new and radiant. He not only has to put up with another version of himself, but also stop his unsuspecting wife know there are two versions of him wondering around.

This documentary film follows the life of Bethany Hamilton, a promising young competitive surfer from Hawaii, who just as she was becoming one of the most promising female surfers, was attacked by a 15ft Tiger Shark. Bethany survived, but lost her left arm in the attack, but instead of letting it defeat her she was back on the competitive surfing circuit just a year later. An absolutely inspirational tale, following Bethany as a small child before the attack (with lots of family home-footage) to her challenges of re-learning to surf with only one arm. Expect amazing footage of Bethany surfing and great insight into adapting to a new way of life whilst still following her dreams.

If you missed this film at the cinema, now’s your chance to watch the newest version at home. Based on Louisa May Alcott’s book, it follows the lives of the March sisters Jo, Amy, Meg and Beth, battling against conforming to 1868 Massachusetts life and working out if marriage will stop them being who they are. With Emma Watson, Saoirse Ronan, Florence Pugh, Eliza Scalen, Meryl Streep, Laura Dern and Timothee Chalamet – it’ll make you miss the childhood games, fights and laughter you had with your sisters.

Watch it on Amazon.