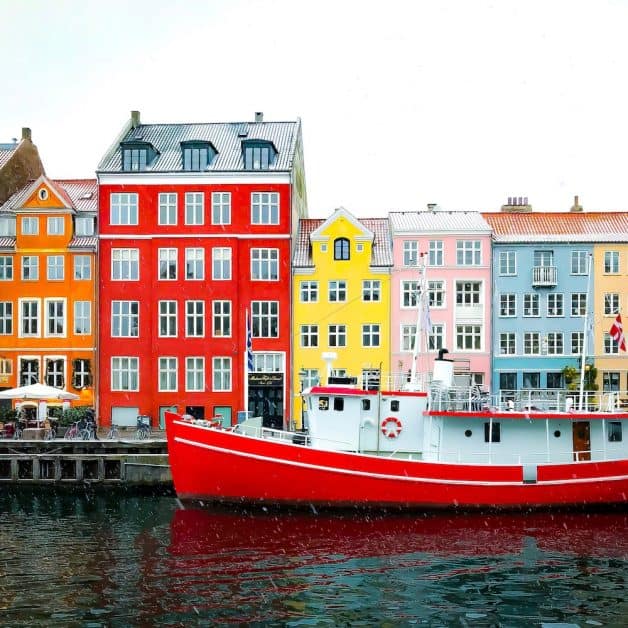 The World Happiness Report has named Denmark amongst the happiest countries in the world for 7 years in a row. Appropriately, it’s capital city, Copenhagen, also regularly features as the world’s happiest city. Although many have tried, it’s been hard for anyone to pinpoint the exact reasons for their contentment. The Danish concept of hygge, loosely translated as cosiness, is often suggested as a potential happiness booster, but it’s a complex cultural concept that can be difficult to define.

So, why are the Danes so happy, and what specific tips can we extract from their lifestyle?

If you spend time with a Danish person, you may notice that they have a habit of responding to comments about sad or negative events with a more positive comment. If you tell a Danish person that it’s going to rain tomorrow, they’re likely to find a positive in that. They might say, ‘that will be a great chance to stay in and spend time together’. It’s not that Danes are false optimists or trying to put on a brave face, but what they’re culture encourages from an early age is an ability to avoid dwelling on the negative, unless it’s strictly necessary.

It might seem like a personality trait, but focusing on the positive is actually a skill you can learn. Start by making a conscious effort to note the moments when you feel inclined to complain or wallow. Sit down and make a note of the negative thought and actively think about how you can reframe the way you look at it. For example, if you’re worrying about your performance at work, you could look at it as an opportunity to grow your skills and identify what you need to study or learn more about. Gradually, this behaviour will become easier and easier until it becomes an unconscious habit.

Research has shown that Danish people tend to leave space in their day for play and spontaneity. Danish children are much more likely to be given unstructured, free play time than British or American children are. It’s a time when they can choose their activity and just ‘play’.

When we’re in a play state, we tend not to look at the clock, not want the time to end and feel totally unguarded and fully ourselves. Ask yourself which activities or places make you feel this way and actively make sure to block out periods of time for them.

The Danes aren’t afraid to get real. Although they focus on framing situations to see the positive, they’re also very honest. If you ask them how they are, don’t expect a cheery, ‘fine thanks’. Expect a real answer and be prepared to give one yourself.

Start talking darlings. Trust that other people will hear you and empathise when you’re honest about what’s going on with you. Try your best to drop the cheerful mask when you need to. You have a right to your feelings just like everyone else does. As a starting point, take time to reflect on your own feelings and emotions daily as part of your gratitude practice. None of us are ‘fine’ all the time. Feelings are like the weather, they change, they’re hard to predict and they’re all necessary for the balance of the whole system. Start to accept your changing feelings and then try being real with people about your inner world. You’ll probably be surprised about the positive reactions you get in response and you’ll certainly open yourself up to deeper, more whole-hearted relationships.

Pay Attention to the Environments You Spend Time In

Hygge is all about being cosy and at peace. It’s that feeling of pure comfort, self-indulgence and having no need to perform for anyone or put up any defences. Danes spend a lot of time paying attention to their environment, be it at home or at work. They maximise the time they spend in environments that make them feel happy and relaxed.

Ask yourself where your happy place is, the place where you feel totally yourself. Look out for spaces and environments that make you feel cosy and looked-after and maximise the time you spend there. Spend time making your home and particularly your bedroom feel like a positive, nourishing space. Monitor the amount of time you spend in environments that activate your fight or flight response and get your adrenalin pumping, like busy city centres or gyms. When you have spent time in these places, be sure to re-nourish and replenish with some down time.

Know That The Key To Success Is Hard Work

In the UK and America we’ve got into the habit of being positive and ‘nice’ to each other much of the time. If someone shows us something they’ve made or a piece of work they’ve done, we’re often programmed to tell them that we love it and they’re really talented. It’s the nice, friendly thing to do. In Denmark, people are much more likely to focus on the hard work and skills involved in a piece of work, and they’re less likely to heap praise unless it’s truly earned. When a Danish child shows their parent a picture they’ve drawn, they might say something like ‘you’ve put a lot of work into this, I can see how hard you’ve tried and I really appreciate it.’ They may also offer some advice to encourage their child to keep working hard, such as ‘next time you could try to add more colour and see what that looks like’. Danish people tend to work from the basic assumption that positive things come from hard work, not from innate talent. That allows them to believe that they could achieve great things, if they only work hard.

Understand that very few people have innate talent in life. Most of the people you see in positions of success have worked extremely hard to get there, and you could join them – if you work hard enough.

Be Kind to Yourself

Hygge is all about looking after yourself, taking time for yourself and nurturing your inner-world.

Be a selfish darling. Don’t be afraid to put yourself and your own needs first, and remember that everyone else has the right to do the same. Other people are capable of looking after themselves. You don’t owe it to anyone to rescue them, but you do owe it to everyone to be your best self and to make sure you’re functioning at optimal, so take time for yourself, say no to social invitations that don’t work for you and don’t be afraid to express your feelings.